Jack Zuraw is a registered architect, but he’s been interested in boats since he was a kid daydreaming about the Chesapeake steamboat era and sailing a Sunfish on family vacations. Since then, he’s crewed on racing sloops on the Bay and sailed up and down the East Coast. Post graduate studies on Nantucket Island, Massachusetts set the stage for and enduring interest in traditional boats.

He built a Catboat called the “Julia Rose” in the 1970s and 1980s and repaired a semi-dory, designed by John Gardner of Mystic Seaport and built by Jack’s wife’s grandfather in the 1960s. When the opportunity arose to buy and restore an old boat, it seemed like a pretty natural thing to do.

Jack holds a US Coast Guard 50 ton Masters credential with a sail endorsement.

The Mick family of Delaware commissioned Mr. Jim Richardson to build a boat for a family of four.

Master, Russell Simon. Might have been on the Delaware… We have heard that she was on the Worton Creek which is about an hour and a half (80 miles) from Woodstown.

One of Mr. Jim’s Sons-in-law did some basic stabilization to keep the Jolly Dolphin going for a few more years. We continue to find evidence of repairs from this period. 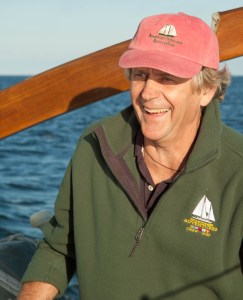 Jack Zuraw bought the Jolly Dolphin on July 5, 2007 with the intention of bringing an almost forgotten piece of Maryland history — a three sail bateau — back to life.

She has primarily been berthed on the upper Magothy River.